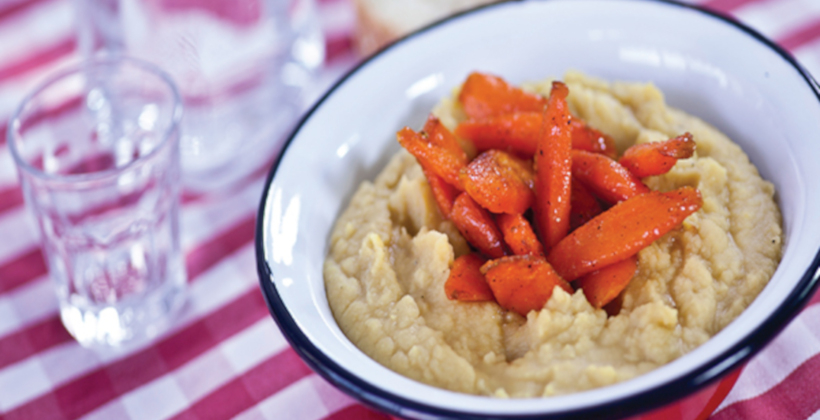 The fava we serve comes straight from Santorini, a very famous Greek island. Our Fava is made of Santorini's yellow split beans, onions and  extra virgin Greek olive oil. You can enjoy it as an appetizer, or as a delicious spread on a freshly baked slice of bread.

To give you a more clear picture of the homeland of Fava, the whole island of Santorini is still an active volcano, and perhaps the only volcano in the world whose crater is located in the sea? Santorini came into existence as a result of a volcanic activity, were twelve massive eruptions took place, one every 20,000 years approximately, and each eruption caused the collapse of the volcano’s central part creating a large crater. The Crater, now, is 1,310 feet (0.4 kilometers) deep. The volcano, however, although it was destroyed, managed to recreate itself over and over again. Prior to the volcanic eruption that occurred on the island it was originally called Strongoli. Strongoli was ‘home’ named by the Minoans during the Neolithic era. Years later, before the current name was adopted, Santorini, the island’s name was Thera (Thira) and the Kalliste which translates to ‘the most beautiful one’.The name ‘Santorini’ was created from two words ‘Santa’ which means ‘Saint’ and Irenene which means ‘Irene.’ The name is thought to be that of a church located in the Valley of Therassia. Bringing up, again, the most extraordinary fact about Santorini, the volcano, due to its eruption all those years ago Santorini has a really fertile land. That is the key to making a good fava. All the ingredients are tasty and fresh but also, combined together create an amazing dish.

So all you need to do is bring the view from this volcanic island down to Caldera right into your home, just by the taste of this amazing spread. Close your eyes and taste the magic!

The one and only Greek mezedaki

Why do we love Greek food?

It’s summer! What should we eat?

Did you know that we ship to over 24 different countries